Twenty five years ago, the biodiversity and beauty of Cabo Pulmo was threatened by overfishing and irresponsible tourism. Now the coral reef in the Mexican state of Baja California Sur is again home to a wide variety of life including several types of fish, crustaceans, mollusks, birds and marine mammals. As we campaign for a global ocean treaty, the successful fight to care for this area shines as an inspiring example of how local communities can bring about great change to benefit both people and the environment.

Thanks to this people power, in 1995 Cabo Pulmo was declared a Natural Protected Area under Mexican law. Since then, numbers of fish have increased by more than 400% and Cabo Pulmo now thrives like a reef that has never been fished in. Likewise, migratory species such as whale sharks,  giant mantas, humpback whales, marine turtles and sharks have returned to the area.  The recovery of this amazing reef is a success story: in part due to the legal protections passed but also due to the collaboration of nearby communities, who even voluntarily stopped their own fishing activities to support the environmental protection of the unique Cabo Pulmo ecosystem. Now, the locals promote sustainable tourist activities such as whale, turtle and shark watching, as well as diving for small groups of visitors.

But this local community isn’t finished with standing up for the oceans.  Over the past 25 years, the beauty of this area has attracted the interests of big companies, such as Hansa Urbana, which in 2008 tried to develop a sprawling new tourist complex named “Cabo Cortés” close to the Cabo Pulmo reef. This project was a threat to the reef and its wildlife from sewage to oil leaking from boats, destruction of coastal dunes and high demand for freshwater, to name a few.

Local communities worked together with organizations like Greenpeace to put pressure on local and federal governments to demand the cancellation of Cabo Cortés. 220,000 citizens signed the petition launched by Greenpeace Mexico to stop this destructive project. Finally, in 2012, the government agreed to these demands and cancelled the building plans . This was a major victory and reflects the importance of defending our ocean sanctuaries, which are vital to protecting our seas and the rich biodiversity that lives there. Once again, we saw what people power can do, when we stand together against greedy companies to protect marine life. 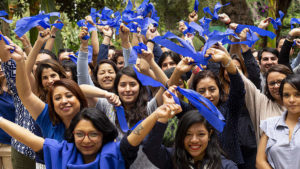 Greenpeace staff and volunteers wave ribbons as an ‘ocean wave’ in Mexico City, Mexico. During an event in the lead-up to World Oceans Day. © Greenpeace

Ocean sanctuaries like Cabo Pulmo have been particularly successful in protecting iconic biodiversity, improving fisheries and benefitting local economies and communities. We need to protect at least 30% of our oceans from damaging human activities, such as industrial fishing, oil drilling and deepwater mining, with a network of oceans sanctuaries.  This would be a huge step for the recovery of ocean ecosystems, and for the wellbeing of our whole blue planet.

Ornela Garelli is an Oceans Campaigner at Greenpeace Mexico

Greenpeace International
Greenpeace exists because this fragile earth deserves a voice. It needs solutions. It needs change. It needs action. Greenpeace is an independent global campaigning organisation that acts to change attitudes and behaviour, to protect and conserve the environment and to promote peace. www.greenpeace.org