Emojis representing Uyghur characters and culture are now available on the encrypted messenger platform Telegram in an effort by the Uyghur diaspora in Russian-speaking countries to raise visibility.

While Uyghurs living in China are experiencing unprecedented attacks on their most basic human rights, the Uyghur diaspora in Russian-speaking countries (an estimated 350,000 people mostly in Kazakhstan, Kyrgyzstan, Russia and Uzbekistan) enjoy relatively greater freedom of expression, and are able to advocate for their rights. One group, called Biz Uyghurlar (We are Uyghurs) based in Russia, publishes information about Uyghur politics, history and culture, mostly in Russian on their website. In late June, the group also launched an initiative to promote Uyghur visibility on-line by releasing a series of stickers for Telegram, which is particularly popular in the post-Soviet space. To understand what motivated Russia’s Uyghur diaspora to engage with social media, Global Voices spoke to Regina Uygur, the coordinator of the sticker project with Biz Uyghurlar.

The interview was edited for brevity.

Filip Noubel (FN) How did you come up with the idea of making stickers for Telegram celebrating Uyghur people and culture?

Regina Uygur (RU) We had the initial idea a long time ago, we just needed time to work out how to develop it. Our first goal is to introduce the rich Uyghur culture to netizens, our second goal is to send a specific social message, since today, in our historical Uyghur homeland, Uyghurs are victims of a genocide, and the ones living in post-Soviet states feel pressure and discrimination, thus we hope our stickers will fill the hearts of Uyghurs with hope and pride for their culture and history. We want other users to see our stickers, use them and get interested in our culture. The fact that nothing like this existed is what motivated us to develop them. We always wanted Uyghurs who use online Russian-language platforms to be able to share elements of their culture with others. 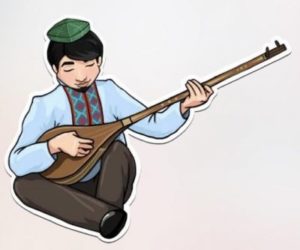 Uyghur man playing one of the national instruments, the dutar (دۇتتار‎, in Uyghur) .

FN Do you know how many people have downloaded them?

RU As of June 30, 437 people have downloaded our stickers and they have been used 1,028 times. They have been available since June 26, but were ready much earlier. We wanted to offer them on different platforms, but eventually decided to launch them first on Telegram, and get feedback from users. If people want us to add specific emotions, traditional clothing, etc, we will, and later we plan to make them available on other platforms. 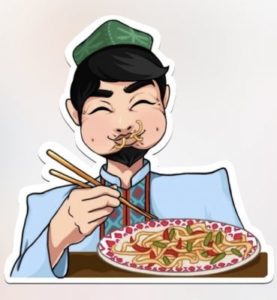 FN Who created them and based on what criteria?

RU A multi-ethnic group of artists worked on them as a team. The process started with selecting emotions and situations from daily life that Uyghurs are familiar with: happy, rebel, satisfied, surprised, in love. Those ideas were developed by me, and then turned into drawings by the artists. Then they were discussed and edited. In fact a very detailed understanding of Uyghur history and all the nuances of our culture went into making these stickers. Throughout our history, certain details of our national costumes changed frequently, reflecting different regions. That’s why, when we developed our stickers, our goal was to represent not just emotions, but all the variations of our ethnicity. That is why our characters wear different hats and clothes. We also wanted to present interesting aspects of our traditions: our love for tea with milk (Əткян чай), and lagman, our famous hand-made noodles, hunting with eagles that was popular last century, our talent for music, etc. We will continue to expand our collection as we get more feedback from users. 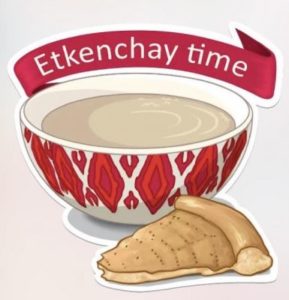 Image of Uyghur milk tea and piece of nan, the traditional bread.

RU This project started as an experiment way back in 2015, as a group on social media. The fact is that we, as Russian-speaking Uyghurs living in post-Soviet states, know our great history, engage in our rich culture and pay tribute to our ancient traditions. But the political situation is such that we have become separated from the information flows relating to our homeland. We were only able to access news about the violation of human rights in Xinjiang in Western media. In 2015 there were very few sites publishing interesting content about public figures and events in Xinjiang.

That is why in 2015-16 we decided to focus on this content, without touching on politics that was already available on so many sites. This idea was met positively, and we were able to develop our project thanks to the active support of our audience. The situation changed in 2017, when the new Party head for Xinjiang, Chen Quanguo appeared and started his repressive campaign aimed at destroying Uyghur national identity. And then the news came out about Chinese pressure on Uyghur communities in Central Asia. We decided to ignore the censorship that suffocates Uyghurs in China and in post-Soviet states, and started translating and publishing content about violations of human rights. 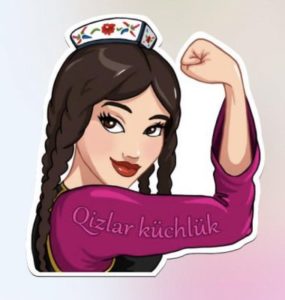